Per capita income, population volume and density, the structure of cities, transport infrastructure or whether districts have their own schools are all factors that can affect the spread of COVID-19. This has been confirmed by a study carried out in 73 districts in Barcelona by researchers from the departments of Geography and Economics of the Universitat Rovira i Virgili, the results of which have been published in the Journal of Public Health. The research reveals that the analysis of the characteristics of every district can facilitate decisions on the specific measures to be applied to individual districts in an attempt to effectively reduce the rate of infection.

To carry out the study, the researchers analysed the data provided by the Public Health Agency of Barcelona on the 41,606 people who were infected with the coronavirus during the first two waves of the pandemic in the 73 districts of the capital. Work was done in two different time periods to differentiate the two waves: the first was from 26 February to 15 July and the second was from 16 July to 16 October. This information showed how the individuals in the city were distributed and whether the positive cases followed some sort of territorial pattern in the sense that levels would be low or high in neighbouring districts. 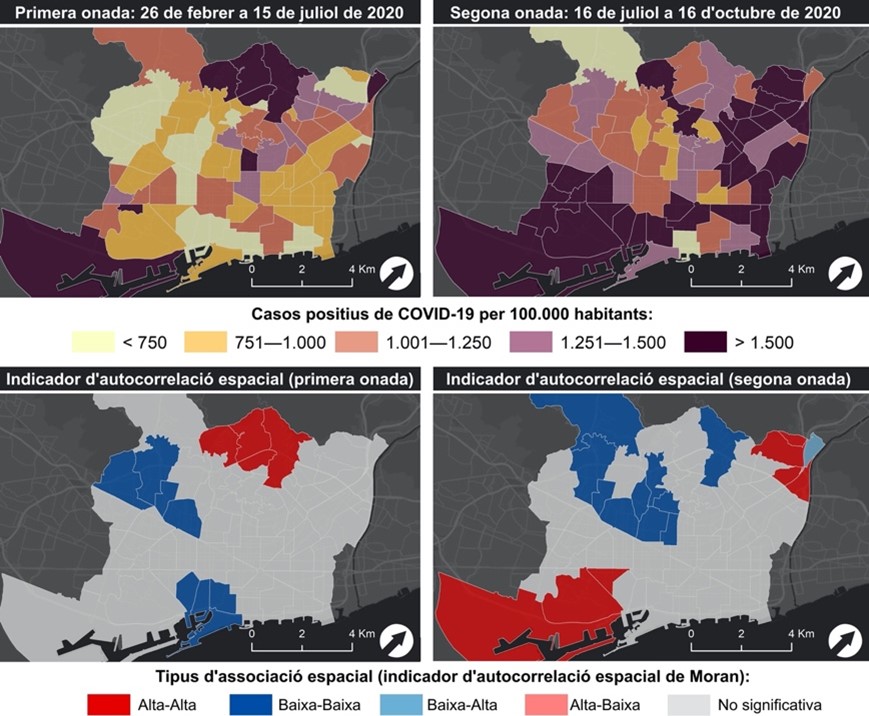 The study found that the characteristics of every district had a direct impact on the spread of the virus. “The results of the model are clear: particular characteristics show that the virus has particular effects in both waves: for example, the higher the population density is, the more cases there are, and the higher the average income is, the fewer cases there are,” explains Josep Maria Arauzo, professor of the URV’s Department of Economics and one of the authors of the study.

But the study also shows that in the two waves the collective behaviour of the population was different, which may explain why the virus spread differently in different areas. In this regard, the population structure plays a key role since in the first wave the percentage of positive cases was highest among senior citizens. However, as soon as greater social interaction was allowed and the shortcomings of managing nursing homes had been detected, the highest numbers of infections were found in those districts with a younger population while the number of infections in districts with older populations decreased. “We also observed that the presence of educational institutions increased the number of infections, not because of organisational in these institutions but because of the interactions that took place outside them,” points out Aaron Gutiérrez, a researcher from the URV’s Department of Geography.

“The study shows the importance of taking local differences into account when adopting measures to efficiently combat the pandemic since if the same measures are applied equally in all places these differences will mean that their effects are quite different,” concludes the researcher Antoni Domènech.